The global genetically modified seeds market was valued at US$ 23.06 billion in 2020 and is predictable to reach US$ 37.51 billion in 2028; projected to grow at a CAGR of 5.4% during the forecast period from 2021- 2028. Genetically modified seeds are termed as the seeds which have been modified to comprise specific characteristics like resistance to herbicides or resistance to pests. GM seeds are advantageous compared to conventional seeds owing to increasing yields, long shelf life, an ability to sustain climate change, reduction of crop damage from weeds, diseases and insects while improving nutrition value. Various research and developments in seeds modification via genetic decoding helps the farmers from environmental conditions like drought, and salinity and demand for more genetically modified seeds owing to its advantages. 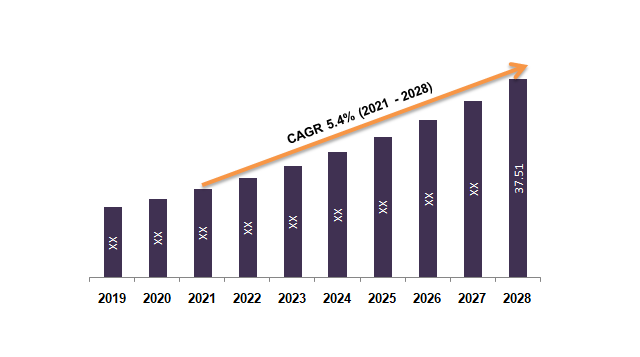 Modern biotechnology plays a vital role in increasing the per hectare production of more nutritious crop varieties while protecting natural resources. Increasing demand for seeds from the sectors like food, animal feed, beverage and biofuels industry is uplifting the growing market demand for genetically modified seeds. Demand for genetically modified (GM) seeds have seen growth in the countries like India, and China owing to huge population base which urge for ever increasing food grains demand driving the market growth in the region. According to US Energy Information Administration (EIA), corn is a primary feedstock of ethanol production, U.S. produced 15.1 billion heaps of corn during 2016–2017 greater than 11% from 2015–2016. Furthermore, according to Renewable Fuel Association, total ethanol production of the U.S. has increased from 14.30 billion gallons in 2014 to 14.81 billion gallons in 2015.Further, escalating demand of oleo-chemicals from genetically modified seeds will acts as a significant trend for market growth owing to numerous industries shifting towards oleo-chemicals instead of petrochemicals as oleo-chemical has cheaper cost and eco-friendly nature.

Global genetically modified (GM) seeds market is segmented by type, crop type, trait,distribution channel and region. By type, it is categorised into conventional and genetically modified. Based on crop type, it bifurcates into cereals & grains, oilseeds & pulses, fruits & vegetables and others (including fiber crops & other commercial crops like tobacco and medicinal plants). By trait, it is grouped into insect resistance, herbicide tolerance and others. Further, distribution channel segments into e- retailers, direct sales and others. Based on regional insights, it bifurcates into North America (US, Canada, Rest of North America), Asia Pacific (China, India, Vietnam, Bangladesh, Rest of Asia Pacific), Europe (UK, Russia, Germany, Rest of Europe), Rest of the World (Latin America and Middle East & Africa).